The best Sardinian beaches near our apartments 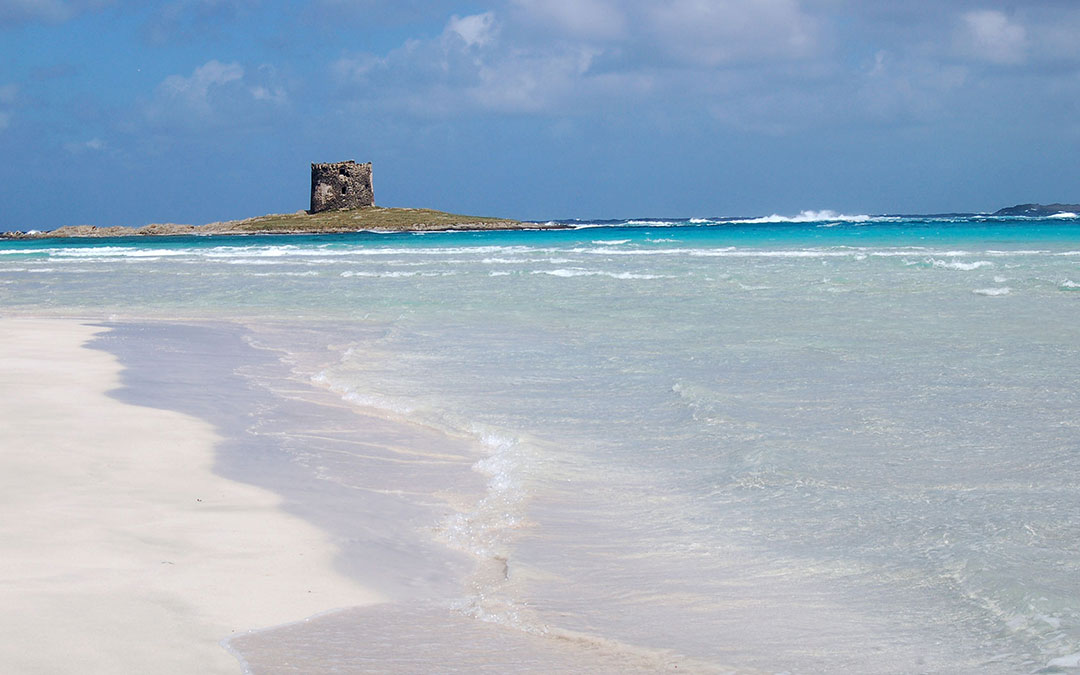 La Pelosa beach is one of the most beautiful beaches of Sardinia, renowned all over the world for the beauty of the sea. Its wonderful colours, the transparencies of the water and the very fine white sand make it look like a tropical beach rather than a Mediterranean one.
Located in the Asinara gulf to the North-East of Capo Falcone, La Pelosa beach is protected from the open sea by a natural barrier made by the stacks of Capo Falcone, by the Piana island and by the Asinara island. Thank this position, it has an almost always flat sea.

Capo Falcone, a promontory on the North-West of Sardinia, takes its name from an old tower on the hill, called Falcone Tower, that used to be a defensive bulwark during Spanish domination. The rock is granitic; for its particular aspect is famous as “Stintino Stone” and a lot of cottages are finished with it. All around is the Mediterranean scrub.
The promontory separates the “outside sea” where rocks and deep blue sea can be found, from the “inside sea” of La Pelosa beach with its turquoise waters.

The Pelosa Tower is the most famous tower in the region, and in the last 20 years has become almost an icon, the symbol itself of the Pelosa Beach; it is located on a very small isle in front of the beach that from this tower took its name. Built in 1578, the tower is a cylindrical single-storey stone building, with a mushroom-shaped vault; it is 6 mt. high with the entrance at a height of 3 meters. It’s very easy to reach by sea for a visit. 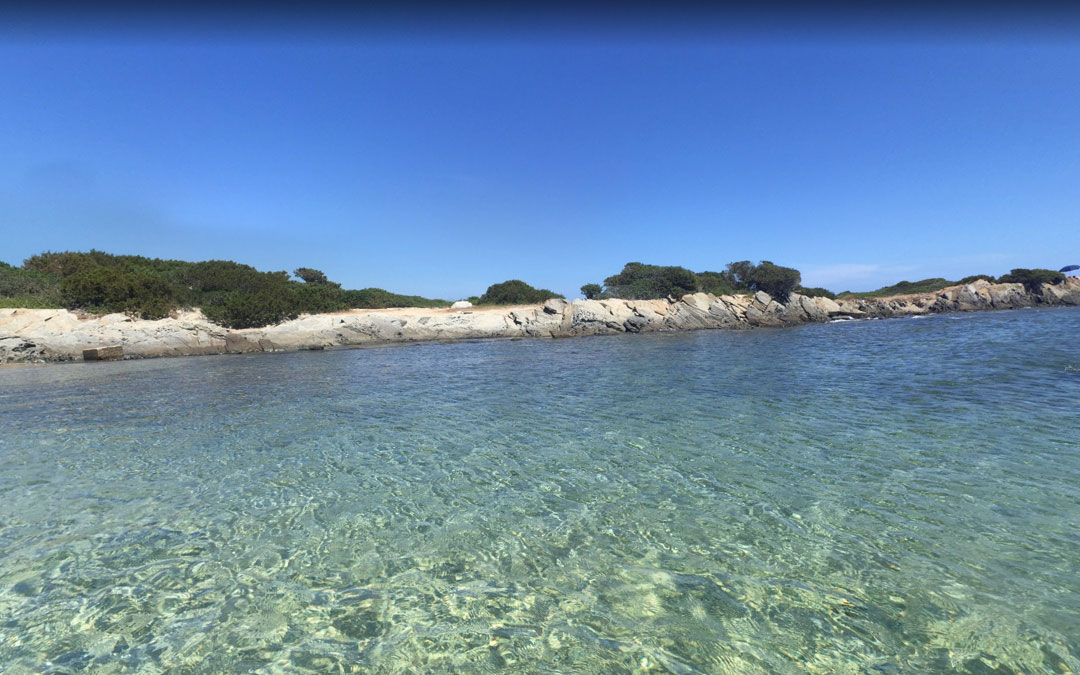 The beach of Cala Lupo is made up of rocks and coarse sand, lapped by extraordinarily clear, that assembles beautiful shade of emerald green and blue. Draw a very impressive show, not only for the lush vegetation surrounding it but also for the rugged rocks that are reflected in the sea. Despite being beautiful, is not much frequented by bathers: it is ideal for sunbathing or swimming in absolute peace and quiet. 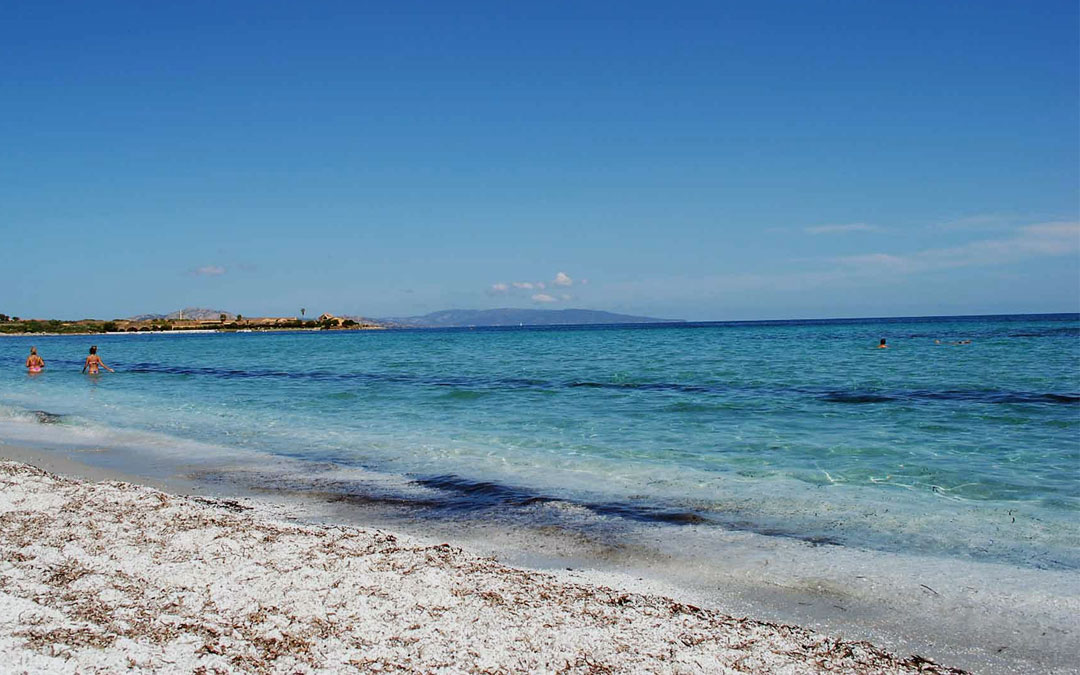 The beach of Le Saline is a large cove that overlooks the salt marshes near the structures used since the thirteenth century by the monks of Santa Maria di Tergu. Her beauty, linked to the beautiful blue sea and white sand, lies in the fact of being dominated by a tower of the oldest of Sardinia. Also found in these buildings close to the trap of Saline, dating from the seventeenth century and abandoned in the late 60s of the twentieth century.
The beach is popular, as well as for its beautiful sea, even as it offers several services. First, a large car park that can accommodate motorhomes, second refreshment centres as a hotel, bar and restaurant. It’s possible to rent chairs and umbrellas, or the pedal boats to explore the coastline. With its low shores of the sea is suitable for the child, and when it is moved by the wind is ideal for sportsmen who practice kitesurfing and windsurfing. The beach is accessible for persons with disabilities.

A video tour of Stintino and its beautiful beaches (©Flycam)

The Pelosa beach in Stintino is the ideal spot to practice all water sports. The Isola Piana and small Island of Saracena tower protect the sea area in front of the beach and it’s possible to cruise safely.
You can reach the Windsurfing Center Stintino in only 10 minutes by foot

Here you can rent windsurf, kayaks and sailing boats.

Within only 1 km there are diving centers equipped for all type of scuba divers, professional or beginners. Here it’s possible to book scuba tour in the Natural Reserve of Asinara. All diving centers are PADI authorized.

Near to Residence La Pergola is possible to find the Circolo A.S. Junior Tennis Stintino with hard courts.